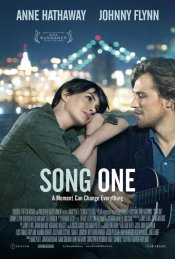 A young woman strikes up a relationship with her ailing brother's favorite musician.

Anne Hathaway stars as Franny in Song One, a romantic drama set against the backdrop of Brooklyn's vibrant indie music scene. After Franny’s musician brother Henry (Ben Rosenfield, Boardwalk Empire) is injured and hospitalized in a coma following a car accident, Franny returns home after a long estrangement and begins to use his notebook as a guide to how his life has evolved in her absence. Franny seeks out the musicians and artists Henry loved, in the course of her journey meeting James Forester (Johnny Flynn), his musical idol, whose success and fame belie a shy and private man. As a strong romantic connection develops between Franny and James, the question becomes if love can bloom even under the most adverse circumstances.

Poll: Will you see Song One?

A look at the Song One behind-the-scenes crew and production team.

Production: What we know about Song One?

Song One Release Date: When was the film released?

Song One was released in 2015 on Friday, January 23, 2015 (Limited release). There were 10 other movies released on the same date, including Strange Magic, Black Sea and Mortdecai.

Q&A Asked about Song One

Looking for more information on Song One?