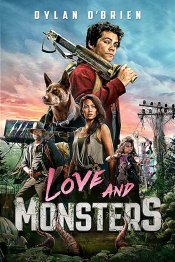 June 27, 2019 • Filming completed; editing of shot film; music composition and recordings, as well as sound and visual effects being added.

Living underground after giant creatures took control of Earth, Joel Dawson (Dylan O’Brien) reconnects with his girlfriend Aimee (Jessica Henwick) on the radio. Against all logic, Joel decides to risk it all on an epic 80-mile journey to find her.

Poll: Will you see Love And Monsters?

"The Boss Baby: Family Business" , "The One and Only Ivan"

Production: What we know about Love And Monsters?

Love And Monsters Release Date: When was the film released?

Love And Monsters was released in 2020 on Friday, October 16, 2020 (VOD / Digital release). There were 9 other movies released on the same date, including 2 Hearts, Clouds and The Trial of the Chicago 7.

Q&A Asked about Love And Monsters

Looking for more information on Love And Monsters?