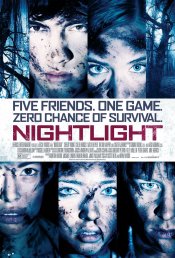 For years, the Covington forest has been shrouded in mystery, with a dark past as a final destination for troubled youths. Undeterred by the news of a classmate who recently took his life in those woods, five teens journey into the forest for an evening of flashlight games and ghost stories. But their plans go awry when the friends awaken a demonic presence, an unseen evil that will seize upon their deepest fears—and plunge them into a nightmare of absolute terror.

Poll: Will you see Nightlight?

"Valentine's Day" , "Aliens in the Attic"

Production: What we know about Nightlight?

Just wrapped on location in Utah.

Nightlight Release Date: When was the film released?

Nightlight was released in 2015 on Friday, March 27, 2015 (Limited release). There were 7 other movies released on the same date, including Get Hard, Home and While We're Young.

Looking for more information on Nightlight?