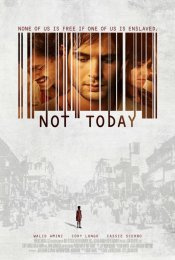 When a college student travels to India for a summer trip with a few friends, he finds himself in a situation that will change his life forever. He meets a young girl and her father, Dalits by birth, who are facing starvation and plead for his help.

Poll: Will you see Not Today?

Crew: Who's making Not Today

A look at the Not Today behind-the-scenes crew and production team.

Production: What we know about Not Today

Not Today Release Date: When was it released?

Questions: Asked About Not Today

Looking for more information on Not Today?