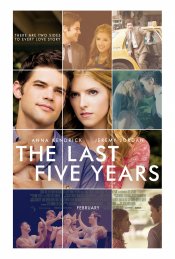 A musical chronicling a love affair and marriage taking place over a five year period. Jamie Wellerstein (Jordan) is a young, talented up and coming novelist who falls in love with Cathy Hiatt (Kendrick), a struggling actress. Their story is told almost entirely through song. All of Cathy's songs begin at the end of their marriage and move backwards in time to the beginning of their love affair, while Jamie's songs start at the beginning of their affair and move forward to the end of their marriage. They meet in the center when Jamie proposes.

Poll: Will you see The Last 5 Years?

Crew: Who's making The Last 5 Years

Production: What we know about The Last 5 Years

Begins shooting in NY the week of June 17th.

Anna Kendrick has signed on to star in The Last 5 Years, an adaptation of the off-Broadway play. The Exchange has acquired all international rights and will sell the pic at the American Film Market.

The Last 5 Years Release Date: When was it released?

The Last 5 Years was released in 2015 on Friday, February 13, 2015 (Limited release). There were 2 other movies released on the same date, including Fifty Shades of Grey and Kingsman: The Secret Service.

Questions: Asked About The Last 5 Years

Looking for more information on The Last 5 Years?