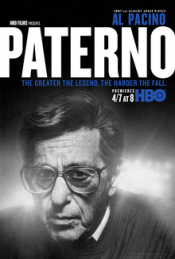 July 28, 2018 • Awaiting release by distributor; release date not yet announced.

Penn State head football coach Joe Paterno's legend is undone by revelations he and others in the football program were aware that former defensive coordinator Jerry Sandusky was molesting children, and did little to stop it, supposedly fearing bad publicity for the powerhouse gridiron program they presided over.

Production: What we know about Paterno (TV Movie)

Paterno (TV Movie) Release Date: When is it coming out?