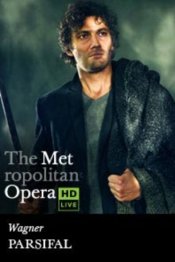 The broadcast of Wagner’s Parsifal will be presented live for only one day on Saturday, March 2, 2013 at 12 PM ET / 9 AM PT in select movie theaters. Jonas Kaufmann stars in the title role of the innocent who finds wisdom in François Girard's new vision for Wagner's final masterpiece. His fellow Wagnerian luminaries include Katarina Dalayman as the mysterious Kundry, Peter Mattei as the ailing Amfortas, Evgeny Nikitin as the wicked Klingsor, and René Pape as the noble knight Gurnemanz. Daniele Gatti conducts.

Poll: Will you see The Met: Parsifal?

Crew: Who's making The Met: Parsifal

A look at the The Met: Parsifal behind-the-scenes crew and production team.

Production: What we know about The Met: Parsifal

The Met: Parsifal Release Date: When was it released?

Questions: Asked About The Met: Parsifal

Looking for more information on The Met: Parsifal?