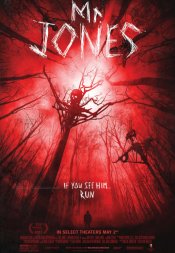 Scott (Jon Foster) and Penny (Sarah Jones) just moved to a remote cabin to escape the pressures of the world and breathe new life into their art. But they’ll soon discover they are not alone: an infamously reclusive artist – known only as ‘Mr. Jones’ – lives nearby. He doesn’t like to be disturbed, and only comes out at night when he drags his strange, sinister sculptures deep into the woods. When Scott and Penny’s curiosity leads them too close for Mr. Jones’ comfort, he plunges the young couple into a nightmare world of mayhem, madness and mind-bending terror.

"The Mysteries of Pittsburgh" , "Stay Alive"

A look at the Mr. Jones behind-the-scenes crew and production team. The film's writer Karl Mueller last wrote The Divide.

Production: What we know about Mr. Jones?

Mr. Jones Release Date: When was the film released?

Mr. Jones was released in 2014 on Friday, May 2, 2014 (Los Angeles release). There were 8 other movies released on the same date, including The Amazing Spider-Man 2, Walk of Shame and Belle.