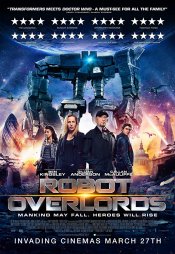 Follows a teen (Callan McAuliffe) who gathers a group of teens together to search for his long lost father in the midst of a war between humans and robots. The teen discovers a way to fight back, and he realizes that there’s more to this war than his own family.

Poll: Will you see Robot Overloads?

A look at the Robot Overloads behind-the-scenes crew and production team. The film's director Jon Wright last directed Grabbers and The Little People.

Production: What we know about Robot Overloads

Shooting begins June 3, 2013 in Ireland with a reported $21 million budget.

Robot Overloads Release Date: When was it released?

Robot Overloads was released in 2015 on Friday, July 3, 2015 (Limited release). There were 4 other movies released on the same date, including Jackie & Ryan, In Stereo and Jimmy's Hall.