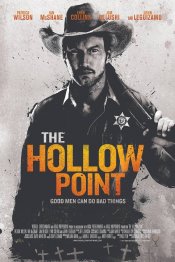 After a botched Mexican cartel deal in the back roads of a border town, the town’s new sheriff must team up with the retired lawman he replaced to investigate the source of the deal in order to stop a mysterious cartel butcher and his systematic brutalization of the town’s residents.

Poll: Will you see The Hollow Point?

Crew: Who's making The Hollow Point

A look at the The Hollow Point behind-the-scenes crew and production team. The film's director Gonzalo Lopez-Gallego last directed Open Grave and Apollo 18.

Production: What we know about The Hollow Point

Production is scheduled to being in late August 2013.

The Hollow Point Release Date: When was it released?

The Hollow Point was released in 2016 on Friday, December 16, 2016 (Limited release). There were 7 other movies released on the same date, including Collateral Beauty, La La Land and Rogue One: A Star Wars Story.

Questions: Asked About The Hollow Point

Looking for more information on The Hollow Point?