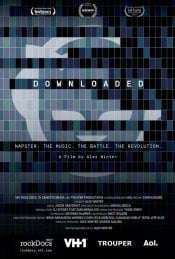 Focuses on the advent of digital media sharing, including the rise of game-changing company Napster and its controversial online pioneers Shawn Fanning and Sean Parker. The digital revolution ultimately created a technology paradigm shift and upended both the music industry and music artists, and changed the world.

Poll: Will you see Downloaded?

A look at the Downloaded behind-the-scenes crew and production team. The film's director Alex Winter last directed Zappa and Trust Machine: The Story of Blockchain.

Production: What we know about Downloaded

Downloaded Release Date: When was it released?

Downloaded was released in 2013 on Friday, June 21, 2013 (Limited release). There were 12 other movies released on the same date, including Monsters University, World War Z and Compulsion.

Looking for more information on Downloaded?