Get a Horse! Movie 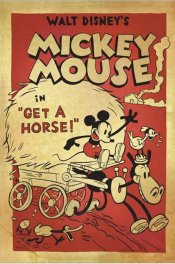 Featuring Walt Disney himself as the voice of Mickey Mouse, this black-and-white, hand-drawn theatrical short follows Mickey, his favorite gal pal Minnie Mouse and their friends Horace Horsecollar and Clarabelle Cow as they delight in a musical haywagon ride—until Peg-Leg Pete shows up and tries to run them off the road.

Poll: Will you see Get a Horse!?

Crew: Who's making Get a Horse!

A look at the Get a Horse! behind-the-scenes crew and production team.

Get a Horse! Trailers & Videos

Production: What we know about Get a Horse!

Get a Horse! Release Date: When was it released?

Get a Horse! was released in 2013 on Wednesday, November 27, 2013 (Nationwide release). There were 6 other movies released on the same date, including Homefront, Frozen and OldBoy. Shown with Frozen

Questions: Asked About Get a Horse!

Looking for more information on Get a Horse!?