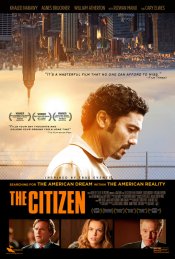 Yearning to leave behind his life of misfortune in the Middle East, Ibrahim Jarrah wins the U.S Green Card Lottery for a chance to become an American citizen. He lands in New York City the day before 9/11... and the events of the September terrorist attacks forever shape the struggles he faces on his journey to capture the American dream.

Poll: Will you see The Citizen?

Crew: Who's making The Citizen

A look at the The Citizen behind-the-scenes crew and production team.

Production: What we know about The Citizen

The Citizen Release Date: When was it released?

The Citizen was released in 2013 on Friday, September 27, 2013 (Limited release). There were 14 other movies released on the same date, including Cloudy with a Chance of Meatballs 2, Don Jon and Rush.

Questions: Asked About The Citizen

Looking for more information on The Citizen?