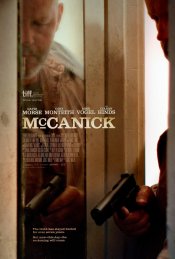 When narcotics detective Eugene “Mack” McCanick (David Morse) discovers that a seemingly harmless young criminal, Simon Weeks (Cory Monteith), has been released from prison, it triggers a firestorm of paranoia and violence. Unbeknownst to the chief of police (Ciaran Hinds), Mack and his partner, Floyd (Mike Vogel) mercilessly hunt down Weeks for unknown reasons over the course of one long, hot day. The closer Mack gets to his prey, the more we understand that his frenzy stems from a truth from the past, which only Weeks can expose.

Poll: Will you see McCanick?

McCanick Cast: Who are the actors?

Production Timeline: When did the McCanick come together?

McCanick Release Date: When was it released?

McCanick was released in 2014 on Friday, March 21, 2014 in limited movie theaters. There were 13 other movies released on the same date, including Divergent, Muppets Most Wanted and A Birder's Guide to Everything.

Looking for more information on McCanick