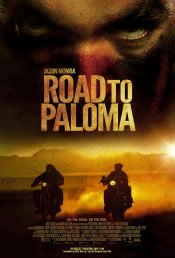 Follows Wolf, a Native American on the run after avenging his mother’s murder. As he flees across the desolate American West on his motorcycle, he’ll discover that justice has a cost – Wolf’s search for redemption will reveal secrets and take him on a journey where the roads have some very unexpected turns.

Poll: Will you see Road to Paloma?

A look at the Road to Paloma behind-the-scenes crew and production team. The film's director Jason Momoa last directed Kane.

Production: What we know about Road to Paloma?

Road to Paloma Release Date: When was the film released?

Road to Paloma was released in 2014 on Friday, July 11, 2014 (Limited release). There were 8 other movies released on the same date, including Dawn of the Planet of the Apes, And So It Goes and A Long Way Down.

Q&A Asked about Road to Paloma

Looking for more information on Road to Paloma?