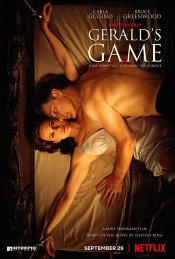 While trying to spice up her marriage in a remote lake house, a woman must suddenly fight to survive when she is left handcuffed to a bed.

A seemingly harmless bondage game between a married couple in a remote retreat escalates to become a harrowing fight for survival at the wife must confront long-buried demons within her own mind — and possibly lurking in the shadows of her seemingly empty house.

Poll: Will you see Gerald's Game?

Production: What we know about Gerald's Game

On or about January 8, 2017, the film was in Post-Production status.

Production is scheduled to begin in fall 2015.

Gerald's Game Release Date: When was it released?

Gerald's Game was released in 2017 on Friday, September 29, 2017 (Netflix release). There were 16 other movies released on the same date, including American Made, Flatliners and A Question of Faith. Fall Release