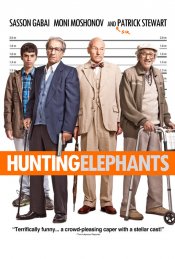 Follows a precocious 12-year-old boy who conspires with three senior citizens to rob a bank in order to save himself and his mother from losing their house.

Poll: Will you see Hunting Elephants?

A look at the Hunting Elephants behind-the-scenes crew and production team.

Production: What we know about Hunting Elephants

Hunting Elephants Release Date: When was it released?

Hunting Elephants was released in 2015 on Friday, May 8, 2015 (Limited release). There were 11 other movies released on the same date, including Hot Pursuit, Noble and Skin Trade.