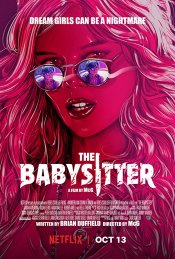 The Babysitter follows a lonely, 12-year-old boy who falls in love with his hot babysitter only to discover that she’s part of a satanic cult that wants to kill him.

Poll: Will you see The Babysitter?

Crew: Who's making The Babysitter

A look at the The Babysitter behind-the-scenes crew and production team. The film's director McG last directed Rim of the World and 3 Days To Kill. The film's writer Brian Duffield last wrote Love And Monsters and Spontaneous.

Production: What we know about The Babysitter

On or about December 12, 2016, the film was in Post-Production status.

Rights picked up by Netflix from New Line Cinema.

The Babysitter Release Date: When was it released?

The Babysitter was released in 2017 on Friday, October 13, 2017 (Netflix release). There were 15 other movies released on the same date, including Marshall, The Foreigner and Happy Death Day.

Questions: Asked About The Babysitter

Looking for more information on The Babysitter?