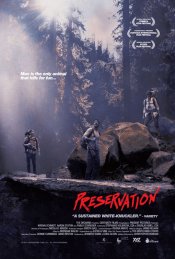 The film follows brothers Sean and Mike and Mike’s wife, Wit - a brainy anesthesiologist - who head out on a hunting trip in a nature preserve. But when the brothers are ensnared by unseen hunters, Wit must unleash her own animal instincts or else end up a trophy.

Poll: Will you see Preservation?

Production: What we know about Preservation

Preservation Release Date: When was it released?

Preservation was released in 2015 on Friday, January 9, 2015 (Limited release). There were 6 other movies released on the same date, including Selma, Predestination and Taken 3.

Looking for more information on Preservation?