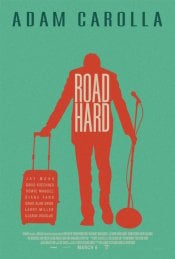 fter his movie and television career has run dry, Bruce Madsen (Adam Carolla) is forced to go back on the road playing one dingy comedy club after another, spending endless nights in budget hotel rooms and always flying coach. Amidst trying to revitalize his career, rekindle his love life and put his daughter through college, Bruce knows one thing for sure - he must get off the road.

Poll: Will you see Road Hard?

A look at the Road Hard behind-the-scenes crew and production team.

Production: What we know about Road Hard

Road Hard Release Date: When was it released?

Road Hard was released in 2015 on Friday, March 6, 2015 (Limited release). There were 8 other movies released on the same date, including Unfinished Business, Chappie and Bad Asses on the Bayou.