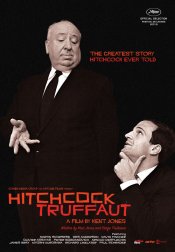 In 1962, Hitchcock and Truffaut locked themselves away in Hollywood for a week to excavate the secrets behind the mise-en-scène in cinema. Based on the original recordings of this meeting—used to produce the mythical book Hitchcock/Truffaut—this film illustrates the greatest cinema lesson of all time and plummets us into the world of the creator of Psycho, The Birds, and Vertigo.

Poll: Will you see Hitchcock/Truffaut?

Production: What we know about Hitchcock/Truffaut

Hitchcock/Truffaut Release Date: When was it released?

Hitchcock/Truffaut was released in 2015 on Friday, December 4, 2015 (Limited release). There were 14 other movies released on the same date, including Krampus, The World of Kanako and Christmas Eve.

Looking for more information on Hitchcock/Truffaut?