A haunting tale of long-buried secrets uncovered in a remote New England town. 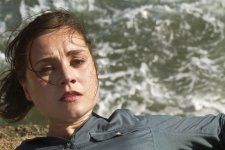 Frank the Bastard centers around Clair Defina (Miner), a 33year-old New Yorker who returns to the childhood home she and her father fled after her mother’s tragic and mysterious death. Arriving in the seemingly quaint Maine town, Clair encounters an undercurrent of secrecy and hostility, most of it linked to the local bigwig Cyrus Gast (Sadler), whose latest land development scheme promises to revitalize the community but is not what it appears to be. Most of the town is intimidated by Cyrus, and when Clair starts delving into events, both present and past, she finds herself in jeopardy. As she comes face to face with a dark legacy that has been buried--literally and figuratively--for decades, she also has a series of strange encounters with the enigmatic Frank Byron, (Comeau) Cyrus' bastard son. In Frank, Clair ultimately finds her only ally in a battle to redeem the crimes of the past.

Poll: Will you see Frank the Bastard?

Crew: Who's making Frank the Bastard

A look at the Frank the Bastard behind-the-scenes crew and production team.

Production: What we know about Frank the Bastard

Frank the Bastard Release Date: When was it released?

Frank the Bastard was released in 2015 on Friday, July 24, 2015 (New York / Los Angeles release). There were 7 other movies released on the same date, including Pixels, The Vatican Tapes and Paper Towns.

Questions: Asked About Frank the Bastard

Looking for more information on Frank the Bastard?