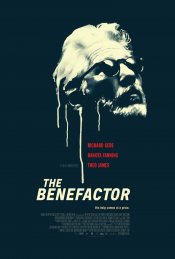 A newly married couple (Dakota Fanning and Theo James) are forced to navigate the all-consuming interest of a powerful, mysterious, and possessive philanthropist (Richard Gere).

Poll: Will you see The Benefactor?

"Underworld: Blood Wars" , "War on Everyone"

A look at the The Benefactor behind-the-scenes crew and production team. The film's writer Andrew Renzi last wrote Janis and They Fight.

Production: What we know about The Benefactor?

The Benefactor Release Date: When was the film released?

The Benefactor was released in 2016 on Friday, January 15, 2016 (Limited release). There were 10 other movies released on the same date, including Norm of the North, Ride Along 2 and 13 Hours: The Secret Soldiers of Benghazi.

Q&A Asked about The Benefactor

Looking for more information on The Benefactor?