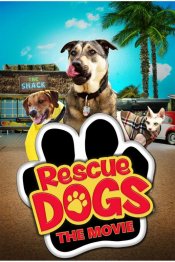 January 31, 2016 • Awaiting release by distributor; release date not yet announced.

Tracy and his rescue dog Charger have to foil the plans of an Evil Businessman who wants to knock over their beach restaurant in order to build his golf course. With help from his brother, Tracy tries to meet the bills, manage the kitchen (where Charger helps cook!) and still find time to fall in love with the beautiful dancer, Bridget. Through a comedy of errors and mishaps, the humans find they themselves can be rescued by their very own rescue animals.

Poll: Will you see Rescue Dogs?

Rescue Dogs Cast: Who are the actors?

A look at the Rescue Dogs behind-the-scenes crew and production team.

Production Timeline: When did the Rescue Dogs come together?

Rescue Dogs Release Date: When is it coming out?