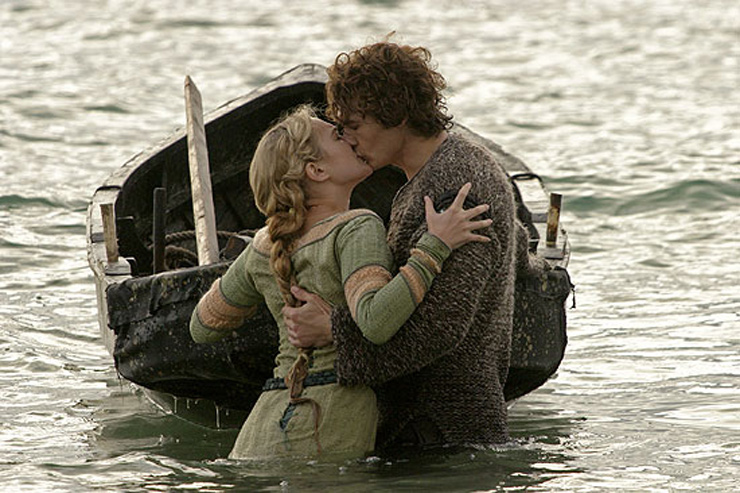 This is the epic tale of a pair of doomed lovers from warring nations, Tristan (James Franco) of Britain and Isolde (Sophia Myles) of Ireland, set during the time soon after the fall of the Roman Empire. Orphaned as a child, Tristan is raised by Lord Marke (Rufus Sewell), a friend of his family, and as he matures, Tristan becomes a brave knight who leads successful attacks against the forces of the Irish King Donnchadh (David O'Hara). When he is poisoned during one of these battles, however, Tristan is placed upon a funeral boat which eventually washes up on the Irish shores, where it is found by the Irish king's daughter, Isolde, who cures Tristan's ailment, as the two fall in love, unaware of who the other one really is. Tristan eventually returns to Britain, where he learns that the Irish king has offered up his daughter's hand in marriage under the guise of bringing the two countries together. Tristan eagerly volunteers to be Lord Marke's champion in the competition, and he wins, but his heart is soon crushed when he discovers that the woman he loves is actually the Irish princess whose hand in marriage he just handed to the man who has been his best friend his whole life...

Poll: Will you see Tristan + Isolde?

Why Him?, Date Night

A look at the Tristan + Isolde behind-the-scenes crew and production team. The film's writer Dean Georgaris last wrote The Meg and Paycheck.

Production: What we know about Tristan + Isolde?

Tristan + Isolde Release Date: When was the film released?


Tristan + Isolde was a release in 2006 on Friday, January 13, 2006. There were 3 other movies released on the same date, including Last Holiday, Glory Road and Hoodwinked.