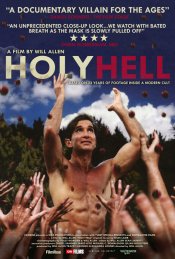 In 1985, recent film school graduate Will Allen became a member of The Buddhafield, a Los Angeles area spiritual group. Also acting as the group’s official videographer, he began to document their activities, which centered on the mysterious leader they called Michel, or The Teacher. Over time, the group’s dark side began to surface as total devotion turned to paranoia, until finally, unexpected truths about their enlightened leader were revealed – all in front of Allen’s camera. This incredible, 22-year archive of video footage became the basis for Holy Hell. Now, for the first time since he left the group, Allen turns the camera on himself and asks fellow ex-cult members to come to terms with their past and the unbelievable deceit they experienced

Poll: Will you see Holy Hell?

A look at the Holy Hell behind-the-scenes crew and production team.

Production: What we know about Holy Hell?

Holy Hell Release Date: When was the film released?

Holy Hell was released in 2016 on Friday, May 27, 2016 (Limited release). There were 6 other movies released on the same date, including Alice Through the Looking Glass, X-Men: Apocalypse and Ma Ma.