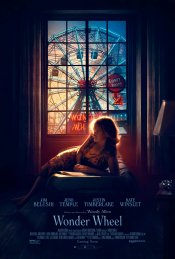 A drama set in Coney Island during the 1950s. Includes larger-than-life characters, lovers, infidelity, and gangsters.

Poll: Will you see Wonder Wheel?

Production: What we know about Wonder Wheel

Wonder Wheel Release Date: When was it released?

Wonder Wheel was released in 2017 on Friday, December 1, 2017 (Limited release). There were 10 other movies released on the same date, including Love Beats Rhymes, Psychopaths and The Disaster Artist.