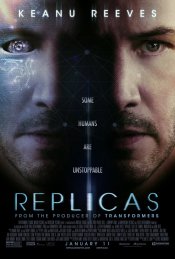 Centers on a scientist (Keanu Reeves) who, after a car accident kills his family, becomes obsessed with bringing them back to life. Alice Eve also is attached to play Reeves' wife.

Poll: Will you see Replicas?

Production: What we know about Replicas

Replicas Release Date: When was it released?

Replicas was released in 2019 on Friday, January 11, 2019 (Nationwide release). There were 12 other movies released on the same date, including The Upside, On The Basis Of Sex and A Dog's Way Home.

Looking for more information on Replicas?