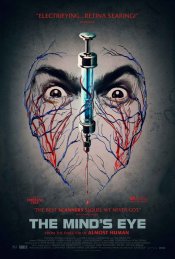 Zack Connors and Rachel Meadows were born with incredible psychokinetic capabilities. When word of their supernatural talents gets out, they find themselves the prisoners of Michael Slovak, a deranged doctor intent on harvesting their powers. After a daring escape, they are free from his sinister institution, but the corrupt doctor will stop at nothing to track them down so that he may continue to siphon their gifts for his own use.

Poll: Will you see The Mind's Eye?

A look at the The Mind's Eye behind-the-scenes crew and production team.

Production: What we know about The Mind's Eye?

The Mind's Eye Release Date: When was the film released?

The Mind's Eye was released in 2016 on Friday, August 5, 2016 (Limited release). There were 8 other movies released on the same date, including Nine Lives, Suicide Squad and Let's Be Evil.

Q&A Asked about The Mind's Eye

Looking for more information on The Mind's Eye?