We Are X Movie 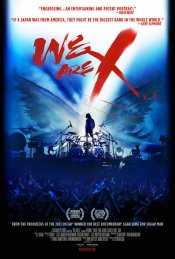 A transcendent rock & roll story about X Japan, the most successful band you’ve never heard of... yet.

der the direction of drummer, pianist, composer, and producer Yoshiki, X Japan has sold over 30 million singles and albums combined and pioneered a spectacle-driven style of rock, creating a one-of-a-kind cultural phenomenon. Chronicling the band’s exhilarating and tumultuous history over the past three decades—persevering through personal, physical and spiritual heartache—the film focuses on preparations for their breathtaking concert at Madison Square Garden.

Poll: Will you see We Are X?

A look at the We Are X behind-the-scenes crew and production team. The film's director Stephen Kijak last directed Shoplifters Of The World.

Watch: We Are X Trailers & Videos

Production: What we know about We Are X?

We Are X Release Date: When was the film released?

We Are X was released in 2016 on Friday, October 21, 2016 (Limited release). There were 13 other movies released on the same date, including Keeping Up with the Joneses, Ouija: Origin of Evil and Jack Reacher: Never Go Back.

Q&A Asked about We Are X

Looking for more information on We Are X?