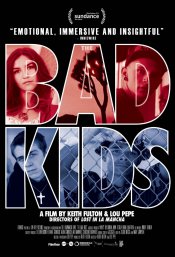 At a remote Mojave Desert high school extraordinary educators believe that empathy and life skills, more than academics, give at-risk students command of their own futures. This coming-of-age drama watches education combat the crippling effects of poverty in the lives of these so-called “bad kids.”

Poll: Will you see The Bad Kids?

A look at the The Bad Kids behind-the-scenes crew and production team. The film's director Keith Fulton last directed Lost in La Mancha and Harrow.

Production: What we know about The Bad Kids?

The Bad Kids Release Date: When was the film released?

The Bad Kids was released in 2016 on Friday, December 16, 2016 (Los Angeles release). There were 7 other movies released on the same date, including La La Land, Rogue One: A Star Wars Story and Collateral Beauty.

Q&A Asked about The Bad Kids

Looking for more information on The Bad Kids?