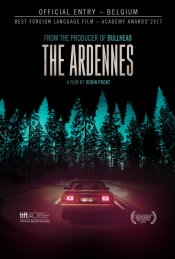 Brothers Kenny (Kevin Janssens) and Dave (Jeroen Perceval) are lumpen Flemish hoodlums whose ineptitude causes Kenny to take the fall when a heist goes wrong. Four years later, Kenny is out of prison, but, as he soon discovers, things have drastically changed. His girlfriend, Sylvie (Veerle Baetens), has moved in with his brother Dave and is pregnant with his baby. Eventually, Kenny's feral impulses put the brothers on the wrong side of the law again, leading them to an awkward collusion with Kenny’s old cellmate, Stef (Jan Bijvoet), amid a gallery of bizarre characters in the forests of the Ardennes.

Poll: Will you see The Ardennes?

Crew: Who's making The Ardennes

A look at the The Ardennes behind-the-scenes crew and production team. The film's director Robin Pront last directed The Silencing.

Production: What we know about The Ardennes

The Ardennes Release Date: When was it released?

The Ardennes was released in 2017 on Friday, January 6, 2017 (Limited release). There were 10 other movies released on the same date, including A Monster Calls, Hidden Figures and Underworld: Blood Wars.

Questions: Asked About The Ardennes

Looking for more information on The Ardennes?