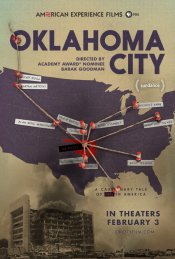 On April 19, 1995, Timothy McVeigh, a former soldier deeply influenced by the literature and ideas of the radical right, parked a Ryder truck with a five-ton fertilizer bomb in front of the Alfred P. Murrah Federal building in Oklahoma City. Moments later, 168 people were killed and 675 were injured in the blast. OKLAHOMA CITY traces the events—including the deadly encounters between American citizens and law enforcement at Ruby Ridge and Waco—that led McVeigh to commit the worst act of domestic terrorism in American history. With a virulent strain of anti-government anger still with us, the film is both a cautionary tale and an extremely timely warning.

Poll: Will you see Oklahoma City?

Production: What we know about Oklahoma City

Oklahoma City Release Date: When was it released?

Oklahoma City was released in 2017 on Friday, February 3, 2017 (Limited release). There were 12 other movies released on the same date, including Rings, The Space Between Us and Don't Knock Twice.