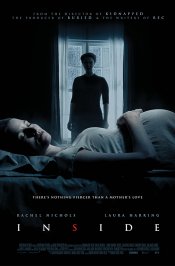 Young mother-to-be Sarah is trying to rebuild her broken life: recently widowed in a shattering car crash that left her partially deaf, with her baby’s birth uncomfortably long overdue and alone, unpacking in unfamiliar surroundings having just moved home. She can only just stay afloat.

As night descends on her deserted suburban street, there’s an unexpected arrival at the doorstep: Sarah receives a most unwelcome visitor.

Alone and carrying her baby, Sarah faces a calculating, cold-hearted and predatory woman – an adversary who will stop at nothing to snatch her unborn child.

Trapped and disorientated, barely able to hear the evil that stalks her, Sarah must unleash all her reserves of strength to protect her baby and survive the night.

Poll: Will you see Inside?

Crew: Who's making Inside

A look at the Inside behind-the-scenes crew and production team. The film's director Miguel Angel Vivas last directed Kidnapped and Welcome to Harmony. The film's writer Jaume Balaguero last wrote Fragile and Darkness.

Production: What we know about Inside

Inside Release Date: When was it released?

Inside was released in 2018 on Friday, January 12, 2018 (Limited release). There were 14 other movies released on the same date, including The Commuter, Proud Mary and The Post.

Questions: Asked About Inside

Looking for more information on Inside?