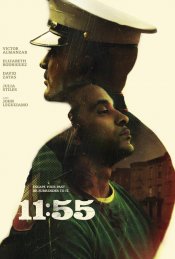 Follows U.S. Marine Nelson Sanchez (Almanzar), who just returned to his neighborhood after serving in the War in Afghanistan. Amid the celebration honoring his homecoming, word reaches him that the vengeful brother of a drug dealer he accidentally killed years ago, is due to arrive on the 11:55 bus into town. Suddenly Nelson is faced with a new battle as he struggles to break from the cycles of violence that have previously defined him.

A look at the 11:55 behind-the-scenes crew and production team.

Looking for more information on 11:55?