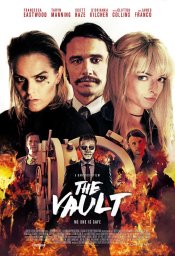 Two estranged sisters are forced to rob a bank in order to save their brother who burned down a warehouse owned by a notorious gangster.

Poll: Will you see The Vault?

Crew: Who's making The Vault

A look at the The Vault behind-the-scenes crew and production team.

Production: What we know about The Vault

The Vault Release Date: When was it released?

The Vault was released in 2017 on Friday, September 1, 2017 (Limited release). There were 12 other movies released on the same date, including Close Encounters of the Third Kind, Unlocked and Tulip Fever.

Questions: Asked About The Vault

Looking for more information on The Vault?