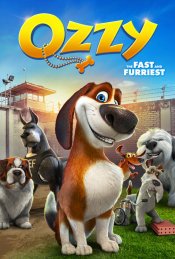 The pampered life of Ozzy, a lovable beagle, is turned upside down when his family leaves him in what seems to be the best canine spa, Blue Creek, before going on a long vacation. But the place’s perfect appearance turns out to be a façade concocted by its villainous owner, Mr. Robbins. Ozzy soon discovers that Blue Creek is a jail for dogs, inhabited mainly by tough street mongrels and where it’s a case of survival of the fittest. Ozzy will now have to avoid danger, find strength where he didn’t think he had any and learn to rely on Chester, Fronky and Doc, his new friends who will accompany him on his adventure as he tries to get back home safe and sound.

Poll: Will you see Ozzy?

Production: What we know about Ozzy?

Ozzy Release Date: When was the film released?

Ozzy was released in 2017 on Friday, April 21, 2017 (Limited release). There were 14 other movies released on the same date, including Phoenix Forgotten, Free Fire and Unforgettable.

Looking for more information on Ozzy?