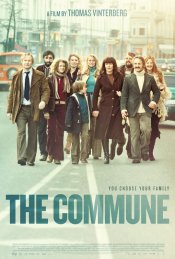 Erik and Anna are a professional couple with a dream. Along with their daughter Freja, they set up a commune in Erik’s huge villa in the upmarket district of Copenhagen. With the family in the center of the story, we are invited into the dream of a real commune; we participate in house meetings, dinners and parties. It is friendship, love and togetherness under one roof until an earth-shattering love affair puts the community and the commune to its greatest test.

Poll: Will you see The Commune?

"The Good Traitor" , "Season of the Witch"

Production: What we know about The Commune?

The Commune Release Date: When was the film released?

The Commune was released in 2017 on Friday, May 19, 2017 (Limited release). There were 8 other movies released on the same date, including Alien: Covenant, Everything, Everything and Diary of a Wimpy Kid: The Long Haul.

Q&A Asked about The Commune

Looking for more information on The Commune?