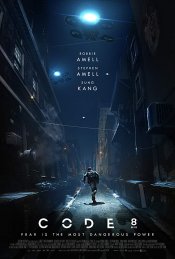 Set in a world where 4% of the population is born with varying supernatural abilities, but instead of being billionaires or superheroes, most “specials” face discrimination and live in poverty, often resorting to crime in a world now carefully monitored by drones, guardians, and the police.

A look at the Code 8 behind-the-scenes crew and production team. The film's director Jeff Chan last directed Plus One and 19 .

Production: What we know about Code 8

Code 8 Release Date: When was it released?

Code 8 was released in 2019 on Friday, December 13, 2019 (Limited release). There were 13 other movies released on the same date, including Jumanji: The Next Level, Richard Jewell and Black Christmas.

Looking for more information on Code 8?