A startling exploration of the evolving relationship between big-game hunting and wildlife conservation. 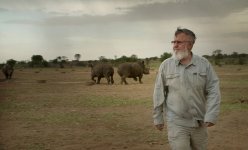 Endangered African species like elephants, rhinos and lions march closer to extinction each year. Their devastating decline is fueled in part by a global desire to consume these majestic animals. TROPHY investigates the powerhouse industries of big-game hunting, breeding and wildlife conservation. Through the eyes of impassioned individuals who drive these industries—from a Texas-based trophy hunter to the world’s largest private rhino breeder in South Africa—the film grapples with the consequences of imposing economic value on animals. What are the implications of treating animals as commodities? Do breeding, farming and hunting offer some of the few remaining options to conserve our endangered animals?

Poll: Will you see Trophy?

A look at the Trophy behind-the-scenes crew and production team.

Production: What we know about Trophy

Trophy Release Date: When was it released?

Trophy was released in 2017 on Friday, September 8, 2017 (Limited release). There were 13 other movies released on the same date, including IT, Home Again and Rememory.

Looking for more information on Trophy?