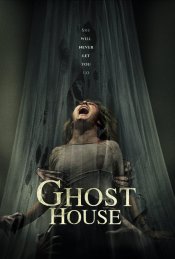 July 16, 2017 • Awaiting release by distributor; release date not yet announced.

A young couple, Jim and Julie, are vacationing in Thailand where Julie falls in love withphotographing small shrines called“Ghost Houses”that are believed to give spirits shelter and comfort. A couple of British travelers take them into the countryside with the promise of showing Jim and Julie a ghost house graveyard where many of theshrines are discarded. After leaving the graveyard with a souvenir, Julie is increasingly plagued by visits from a malevolent spirit that threatens both her sanity and her life. After Julie is literally frozen in a state of terror, Jim must find a way to lift the curse before he loses Julie to the ghost world forever.

Poll: Will you see Ghost House?

A look at the Ghost House behind-the-scenes crew and production team.

Production: What we know about Ghost House

Ghost House Release Date: When is it coming out?

Ghost House is coming out To Be Announced (TBA).