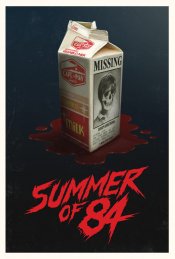 Explores the idea that every serial killer lives next door to someone.

A 15-year old boy (Graham Verchere) spends his summer investigating his police officer neighbor (Rich Sommer) and is convinced he is the local serial killer all over the news.

Production: What we know about Summer of '84

Summer of '84 Release Date: When was it released?

Summer of '84 was released in 2018 on Friday, August 10, 2018 (Limited release). There were 11 other movies released on the same date, including Slender Man, The Meg and Elizabeth Harvest.

Questions: Asked About Summer of '84

Looking for more information on Summer of '84?