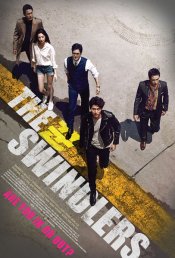 High stakes and fast talk are the game in this crime caper that brings together an all-star cast (Yoo Ji-tae, Hyun Bin, Bae Seong-woo, Park Sung-woong, Nana) as unlikely allies from different sides of the law. Each member of the team has their own motives, but they’ll have to work together to achieve their common goal - trapping the world’s most legendary con man.

Poll: Will you see The Swindlers?

A look at the The Swindlers behind-the-scenes crew and production team.

Production: What we know about The Swindlers?

The Swindlers Release Date: When was the film released?

The Swindlers was released in 2017 on Friday, December 1, 2017 (Limited release). There were 10 other movies released on the same date, including Brotherhood of Blades II: The Infernal Battlefield, The Disaster Artist and 24 Hours To Live.

Q&A Asked about The Swindlers

Looking for more information on The Swindlers?