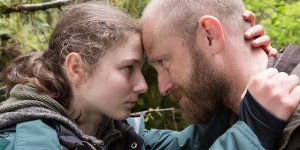 Will (Ben Foster) and his teenage daughter, Tom (Harcourt McKenzie), have lived off the grid for years in the forests of Portland, Oregon. When their idyllic life is shattered, both are put into social services. After clashing with their new surroundings, Will and Tom set off on a harrowing journey back to their wild homeland.

Poll: Will you see Leave No Trace?

Crew: Who's making Leave No Trace

Production: What we know about Leave No Trace

Leave No Trace Release Date: When was it released?

Leave No Trace was released in 2018 on Friday, June 29, 2018 (Limited release). There were 10 other movies released on the same date, including Uncle Drew, Sicario: Day of the Soldado and Black Water.

Questions: Asked About Leave No Trace

Looking for more information on Leave No Trace?