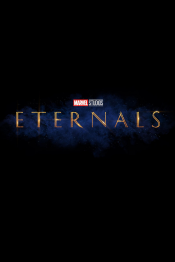 April 3, 2020 • Filming completed; editing of shot film; music composition and recordings, as well as sound and visual effects being added.

Poll: Will you see The Eternals?

"Men in Black: International" , "The Lovebirds"

"Godzilla vs. Kong" , "The Outside Story"

"The Gangster, The Cop, The Devil"

"Raya and the Last Dragon" , "Fantastic Beasts and Where to Find Them"

"The Green Knight" , "The Shadow Of Violence"

Production: What we know about The Eternals?

The Eternals Release Date: When is the film coming out?

The Eternals is coming out in 2021 on Friday, November 5, 2021 (Nationwide release). There is 1 other movie coming out on the same date, including Clifford the Big Red Dog.

Q&A Asked about The Eternals

Looking for more information on The Eternals?