January 4, 2020 • Awaiting release by distributor; release date not yet announced. Releasing on Netflix in March 2020. 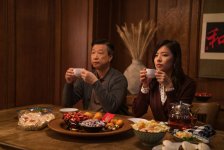 A Taiwanese factory worker leaves his homeland to seek opportunity in America where he struggles to find connection while balancing family an newfound responsibilities.

Poll: Will you see Tigertail?

A look at the Tigertail behind-the-scenes crew and production team. The film's writer Alan Yang last wrote Date and Switch and White Dad.

Production: What we know about Tigertail

Releasing on Netflix in March 2020.

Filming in New York and Taiwan.

Tigertail Release Date: When is it coming out?

Looking for more information on Tigertail?