I Still See You Movie 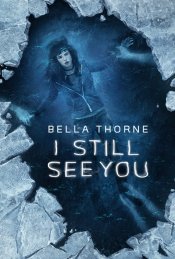 Ten years after an apocalyptic event left the world haunted by ghosts, Roni (Thorne) receives a threatening message from beyond the grave. Joining forces with a mysterious classmate, Kirk, Roni descends into a shadow world that blurs the bounds of the living and the dead—and begins a desperate race against time to stop a cunning killer.

Poll: Will you see I Still See You?

Crew: Who's making I Still See You

A look at the I Still See You behind-the-scenes crew and production team. The film's director Scott Speer last directed Endless and Status Update. The film's writer Jason Fuchs last wrote Wonder Woman and The Clock Without A Face.

I Still See You Trailers & Videos

Production: What we know about I Still See You

I Still See You Release Date: When was it released?

I Still See You was released in 2018 on Friday, October 12, 2018 (Limited release). There were 18 other movies released on the same date, including First Man, Goosebumps 2: Haunted Halloween and Bad Times at the El Royale.

Questions: Asked About I Still See You

Looking for more information on I Still See You?