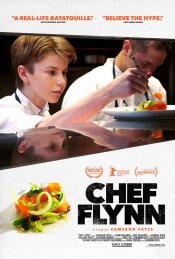 While many of his peers were still playing with toy cars, Flynn McGarry was creating remarkable gastronomic delights at his home in Studio City, California. Enjoying unwavering support from his mother Meg, an artist who documented every step of his distinctive journey, he devoted himself entirely to his creative passion. Flynn loved to prepare elaborate dinners for friends and family and soon became known as the “Teen Chef,” establishing his own supper club at age 12 and being featured in a New York Times Magazine cover story at age 15. Before he was 16, he had staged in top restaurants in Los Angeles, New York, and Europe. But critics soon emerged who challenged Flynn’s rapid ascent in the culinary world, threatening to distract him from his dream.

Poll: Will you see Chef Flynn?

A look at the Chef Flynn behind-the-scenes crew and production team.

Production: What we know about Chef Flynn

Chef Flynn Release Date: When was it released?

Chef Flynn was released in 2018 on Friday, November 9, 2018 (Limited release). There were 13 other movies released on the same date, including The Girl in the Spider's Web: A New Dragon Tattoo Story, Dr. Seuss' The Grinch and Overlord.