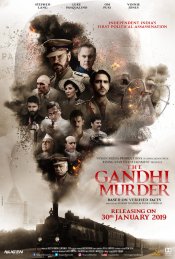 The Gandhi Murder is a conspiracy theory period movie based on true events, that led to the eventual assassination of Mahatma Gandhi. The movie demonstrates a violent India, at the backdrop of a non-violent Gandhi, and hard-line fanatic mind-sets beginning to grow roots in an India divided on the basis of religion. The feature is a story of three police officers in different parts of India, who, well aware of the intelligence that Gandhi's life is under threat, must take key decisions that would eventually either save the Mahatma, or the country.

Poll: Will you see The Gandhi Murder?

Crew: Who's making The Gandhi Murder

A look at the The Gandhi Murder behind-the-scenes crew and production team.

Production: What we know about The Gandhi Murder

The Gandhi Murder Release Date: When was it released?

Questions: Asked About The Gandhi Murder

Looking for more information on The Gandhi Murder?