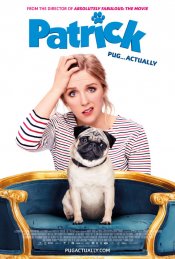 Sarah Francis is a young woman whose life is a bit of a mess. The last thing she needs is someone else to look after, let alone someone who dribbles, snores and eats from the trash! Yet, like it or not, her Grandmother has bequeathed her a very spoiled dog, Patrick – her Pug. Surely she must have had her reasons?! Apparently not, as this four-legged interloper proceeds to cause chaos in all aspects of Sarah's life. But then something remarkable happens. Patrick, with all his stubby, stumpy attitude, begins to turn her life around…

Poll: Will you see Patrick?

"Rocketman" , "You Will Meet A Tall Dark Stranger"

Production: What we know about Patrick?

Patrick Release Date: When was the film released?

Patrick was released in 2019 on Friday, February 15, 2019 (Limited release). There were 5 other movies released on the same date, including Donnybrook, Ruben Brandt, Collector and Umbrella Academy.

Looking for more information on Patrick?